The first trailer for Michael Moore’s Donald Trump documentary Fahrenheit 11/9 has been released, promising an incendiary look at modern life in America. 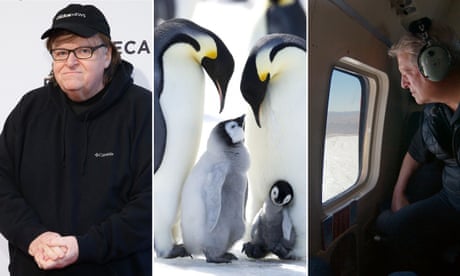 The march continues: why documentary sequels are on the rise

The Oscar-winning film-maker has been focusing on the effect of the president in an attempt to shift public perception before November. “I’m finishing my movie and getting it out before the midterms because I want millions of people to get to the polls,” he said to Bill Maher in June. “We’re going to bring Trump down.”

In the first footage from the film, we see Moore speak to the Parkland student and activist David Hogg and rising Democratic star Alexandria Ocasio-Cortez. The Bowling for Columbine director is also seen spraying “Flint water” into the front yard of Rick Snyder, the governor of Michigan.

Moore describes Trump as “the last president of the United States”. The film’s title is a reference to the day that he won the election.

In an interview with HuffPost, Moore describes Trump as an “evil genius” and speaks to the potential power of his new film.

“On opening weekend, Fahrenheit 9/11 was the No 1 movie in every red state in the country,” he says in reference to his award-winning documentary. “It was a hit in military towns and on military bases. My choir is the American people. The old guard of the Democratic party has failed to speak to them. I will at least give them a song they can belt out.”

Fahrenheit 9/11 remains the highest grossing documentary of all time, having made $222m worldwide.

It’s the latest offering from Moore aimed directly at the effect of Trump, following on from his filmed one-man talk Michael Moore in TrumpLand and his Broadway show The Terms of My Surrender. Moore was originally set to make a film about the presidentwith the Weinstein Company before Harvey Weinstein was hit with multiple allegations of sexual assault.

The documentary will premiere at this year’s Toronto film festival before a US release on 21 September.

“Hope is passive,” Moore said about the movie. “Hope gives you permission to let someone else do the work. Hope leads people to believe that tax returns, or a pee tape, or the FBI or an adult film star will save the country. Hope, and the passivity that comes with it, is what helped get us here to begin with. It’s the lazy way out. We don’t need hope. We need action.”

Film on Tibet refugees settled in India to premiere at TIFF

Film on Tibet refugees settled in India to premiere at TIFF The Sweet Requiem will have its world premiere at the Toronto International Film Festival....